Some tricks are inherently easy to teach an animal because they are based on their core instincts and behaviors. Teaching a horse to play catch is definitely not one of those kinds of tricks.

Horses don’t naturally like to catch objects in their mouths like dogs. They aren’t hunters. They don’t have the instinct to follow an object in flight and try and grasp it with their teeth. Add to this that a horse has a bit of a blind spot directly in front of them, and you can see how this trick can be a bit difficult for a horse to learn. Most horses can learn to “catch” objects by just opening their mouths wide and having the handler toss the object into their mouths. When they feel the object, they close their mouth. Dino, however, has learned to have pretty good eye – mouth coordination, and plays some real catch by grasping the object with his teeth. Check him out in the video below.

If you are wondering why I would teach a horse to play catch….let’s just say that I sometimes have some extra time on my hands while I wait for my daughter to finish with Pony!

Baby Dino is growing up and beginning to learn some big boy dressage movements! Dino is still 3 (4 next month!), and spent most of the year riding-wise just goofing around hacking in a relaxed frame. But, his young age hasn’t stopped us from working on some upper level movements. We just do them in-hand!

The half-pass builds on the very basic lateral movements that baby Dino began learning in-hand as a 2 year old. Dino knows how to perform haunches-in and shoulder-in from my touch. This was then used to build the side pass. When Dino had these movements down, the half pass, was the next logical progression.

Half pass is a forward and sideways movement where the horse is bent in the direction of travel and around your inside leg. Although this sounds similar to the side pass, it is a much more difficult gymnastic for the horse to perform. It is a great exercise to teach in-hand as there is no weight of the rider to influence the horse’s balance. The horse is free to figure it out himself.

Dino picked this up fairly easily at the walk and is progressing to the trot.  He still has his 3 year old moments, but he really does try. You can see his concentration in the pictures below. Gotta Love the Dino!! 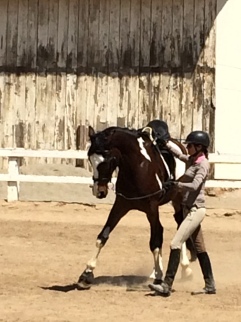 Here is the last step before Wiley learns to jump mini courses! Wiley can:

These are all the basics of free jumping a course. I have started adding some energy to the process as well. Wiley is starting to offer the trot for both the “send” and “recall.” Of course the “jumps” are only poles. I don’t raise the jumps until the horse totally comprehends the idea of jumping courses at liberty. Even then, the jumps are just gradually raised. Wiley is only 2 in this video, so he won’t be jumping any big fences soon, but he can learn the concept! My next step will be to create mini courses out of poles and teach Wiley how to learn the different courses. Even though I can’t ride the baby dinosaur yet, I can still have tons of fun with him….and bond a little in the process!

It’s always fun to look up the ancestry of your horse. And, let’s just say I hope Wiley’s isn’t providing a hint to his future. Oh sure it was full of cool stuff like tracing him back to the Godolphin and Darley Arabians. And, Wiley’s sire line is full of historic UK thoroughbreds like Hambletonian (the racer not the trotter), Eclipse (the 1700’s undefeated Tbred). But it is the lesser known names that concern me. In the 1700s, horse names tended to be very descriptive. There are a lot of names like Darcy’s Yellow Turk, Darcy’s White Turk and even Miss Darcy’s Pet Mare. So imagine my surprise when I discovered names like Clumsey, Clubfoot, SoreHeels, and Sister to SoreHeels throughout Wiley’s dam side. My personal favorite name, however, goes to Sister of Country Wench. I am hoping that this is a preservation of 1700’s humor and not a hint at what kind of quality they were breeding back in the day!

After all of the ground work Wiley has been doing at liberty (turn on the haunches, turn on the forehand, side pass, etc), performing a shoulder in at liberty was straight forward. I took this video on day 2 of his training. I exaggerated the movement so it is easy to see on the video (he is clearly on 4 tracks and bordering on leg yield), and I am still working on controlling lateral movement. The video is a combination of 3 uncut videos, so you can see the work in progress along with some good steps.

To help Wiley understand what I was asking, I used a target for him to follow. Wiley is trained to touch his nose to the target. Since Wiley is already trained to move away from the driving whip, I used it to shape where his hind end needed to go. In essence, his nose follows the target and his hind end stays with the whip.

In a few more months, Wiley will be 3 and I can start lightly riding him. I really want to get all of this foundation training complete so I can transfer it to under saddle work. It makes that stage of training so much easier and less stressful. I can’t wait!